How did these people become so evil? I think I may have found a possible answer 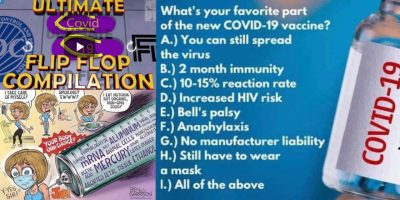 WE KNOW THERE ARE REAL EVIL PEOPLE IN THIS WORLD, BUT THESE PEOPLE SEEM TO BE A WHOLE DIFFERENT BREED OF EVIL & THERE’S A REASON WHY

An idea that has been gaining momentum of late is the notion that many of today’s elite are actually ancient “transported” souls. Meaning these individuals were originally birthed as an entirely different human being from a distant era who continuously practice the occultic Satanic craft of “body-snatching”. Or I guess you could say “manual reincarnation theft”.

READ: Most politicians and celebrities have been violently ‘soul scalped’ in secret rituals

I say “theft” because they literally end up hijacking someone else’s body or “vessel” and forcefully insert their soul into the physical “meat suit” of this person, occupying that person’s body for the rest of its life. In some cases the original soul of the person will completely cease from the body, while in other instances the soul would be relegated to the “sunken place”, like in the film “Get Out”.

It should be noted that the elites seem to have mostly switched over to using advanced synthetic vessels of late instead of snatching the bodies of living humans. I believe these synthetic vessels have a heightened compatibility with this Anti-Christ/Beast “Hivemind” that’s based on A.I. and will utilize the 5G infrastructure that they are currently putting in place, making it a much better option than the traditional biological human vessel. I believe that Chad Boswick and Kobe Bryant sacrificed their old vessels in exchange for one of these new advanced synthetic ones.

I am sure many of you have seen the head busts of the very famous and eccentric Dynastic Egyptian Pharoah Ahkenaton, compared with Barack Obama. They are literally identical. He’s not the only one in his family with an ancient doppelganger. In fact both his daughters and Michelle also look identical to Akehnatens family members..

Crazy how Barry had his lover Michael with him all the way back in Dynastic Upper Egypt. Even back then Barry was forced to hide Michael away and claim to history that it was his sister, since the bust depicting Michelle Obama is supposedly Ahkenatons sister, not wife.

Akehnatens wife Nefertiti looks just like Beyonce. It seems Barry was using her for breeding back then. She’s apparently allowed to be a pop star in the modern era. CONTINUE READING BELOW TO HEAR DONALD MARSHALLS TAKE ON ALL THIS…

Here is what Donald Marshall has to say about “Microchip Heads” as he calls them.

According to Marshall, life as a microchiphead comes with quite a few surprises. For reasons unknown, elite scientists have been unable to design out the tendency for chipheads to revert to a primitive state and take sport in hurting, hunting and eating people, including children. So, you come back alright, explains Marshall, but you come back as a sick, twisted pervert. How’s that for a legacy to leave behind?

So perhaps this gives us some insight into just how individuals like Hillary “Hillarion” Clinton and Barack Hussein Obama got so incredibly evil. They have been repeating this body snatching process for countless generations, resulting in such an infinitely evil and diabolical individual that it seemingly defies any explanation. Until now at least. This Donald Marshall excerpt from one of his testimonials helps to give us a little more color on this topic.