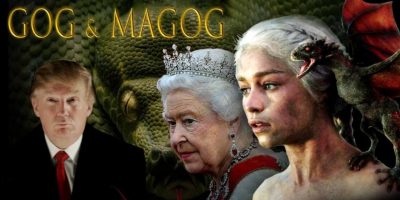 Rise and shine, Information and Keyboard Warriors! Here are some battle tips from Alexander the Great. Still good after all these years.

TIME TO GET OUT THE AMERICAN INTELLIGENCE MEDIA DECODER RING.

Let us decode what’s going on with Randy Andy and the other British propaganda drama going on with Greg Hallett… not to mention how many times YouTube is going to recommend that other crown propaganda piece – The Crown on Netflix.

The British royals can rape and murder its children and no law and order on Earth will hold them accountable. They are pedophiles. The royals can walk in your home, seize your children, use them for sex labor and body parts, rinse and repeat. They have been doing this for a very, very long time.

The Queen can order the assassination of a US President and boom JFK is murdered on order of crown agent Allen Dulles. The Queen says ‘overthrow Donald Trump’ and crown agents Arvinder Sambei and Robert Mueller hop to it and roll out the Crossfire Hurricane Shampeachment.

When these actions weren’t enough to topple America, Queen Lizzie ordered her Pirbright patented coronavirus to be released on the world. On top of that, her boy George Soros is waging his purple revolution on America.

IT’S AN ALL-OUT BRITISH ATTACK ON AMERICA. EXCEPT NO ONE WANTS TO TALK ABOUT IT!!!

If the globalists win, I’m gonna be the first one thrown in the FEMA camps.for sure…lol

God bless you and please keep posting. We all need you.

Our reply: Instead of the FEMA camp, we are all meeting at the D.C. Trump Hotel for cheesecake and lattes after we win the Great Information War. It’s going to be a big deal for the entire planet. Hope you can make it.
.

“Ms. Brennan was determined to stay argumentative and combative and was not happy that AG Bill Barr deconstructed her false talking points. The overall agenda for the media this weekend is to enhance a divisive narrative; and Ms. Brennan has her role to play.”

ALTERNATIVE SUGGESTIONS ROLL IN FOR PRIVILEGED POLITICIANS, CELEBRITIES WHO WANT TO ‘DEFUND THE POLICE’

AMERICA IS IN A CULTURAL CIVIL WAR

NOTE TO RIOTING AMERICANS: POSTING ON SOCIAL MEDIA AFTER CURFEW IS AN INSTA-CRIME

WE ARE WITNESSING A MAOIST CULTURAL REVOLUTION IN THE US AT BREAKNECK SPEED. IT’S STARTLING HOW BROAD AND DEEP THEY CONTROL EVERY MAJOR INSTITUTION
.

YOU’VE BEEN ASLEEP IF THIS SHOCKS YOU

Thanks so much for your content and ongoing mission to educate we the people. I have a question. I am interested in making a donation to the Trump re-election effort. In your opinion, where does this donation need to be made and to whom to ultimately reach the campaign coffers? Thanks Again, Jeff R., Cedatown, GA.

Our Reply: We would not give contributions to the RNC directly. Ronna and the Nevertrumpers will distribute your money to other Nevertrumpers inside the Republican party – like her uncle Mitt, Lisa Ann Murkowski, and Susan Collins, to name a few of the Republican globalists. We recommend that all donations for 2020 go directly to the MAGA candidate of your choice (but please check POTUS tweets for his recommendations) and to www.donaldjtrump.com. When the RNC sends you a request for a donation, send them back a piece of your mind about the job they are doing to support the president.

Here is a creative way to restrict freedom of movement .. at many levels.

STOP THEM CLOSING OUR LOOS

Trump always ahead of the curve. Ditched New York back in October. It’s like he is a time traveler or something.

Drop into the link below to read the discussion about homeschooling. You may find some helpful ideas and you might be able to contribute to the discussion.

HOMESCHOOLING could rise substantially next year.

.Anecdotally, families are reporting that their children are less anxious, more “relaxed,” “reading better,” and “so much happier…The difficult circumstances of the pandemic may lead to an expansion of educational freedom…”

President And Mrs. Obama Address The Class of 2020…a video that looks more like a reminder that Michelle is still around for the VP nomination, Joe. Michelle says “go ahead and do a little dance” so we reminded him of the last time he danced in public.https://www.youtube.com/embed/1j0pokKf2e0?version=3&rel=1&fs=1&autohide=2&showsearch=0&showinfo=1&iv_load_policy=1&wmode=transparent