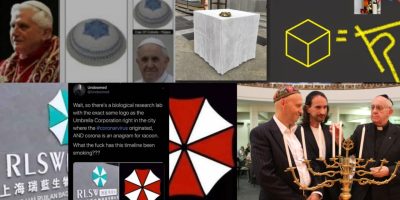 I wonder how many slang iterations of Covid & Coronavirus have been censored by big tech at this point? I bet the list is insane. I’ve been using Covaids. Seems to work well. The algos don’t seem to have flagged it yet. I just wanted to start a post talking about something other than how insane our current reality as a species is at the moment with all the self-suicide going on at the moment.

No End to Covid Mass-Jabbing Madness

Experimental, unapproved mRNA drugs and vaccines for covid mass-jabbing are designed to cause irreversible harm and death sooner or later.

They don’t protect and preserve health as falsely promoted.

Fauci’s Big Lies and mass deception were exposed by his own emails.

He’s reportedly on the cusp of being sacked as Biden regime chief medical advisor — a position he never should have been gotten, nor any other US public health one.

On Friday, Health Impact News (HIN) said the CDC under Walensky should be renamed the Center for Death and Population Control.

HIN accused her and the agency she heads of “committ(ing) crimes against humanity by heading up a program to kill, maim, and render infertile American children between the ages of 12 and 17.”

The same goes for all Americans and others elsewhere who’ve been conned into self-inflicting harm from covid jabs.

No one anywhere needs to be pre-medicated for seasonal flu — now called covid — that’s safely and effectively treated by long ago developed drugs if contract the viral illness.

Walensky, Fauci, and other US public health officials are part of a diabolical social control/depopulation scheme.

Virologist Judy Mikovits earlier explained that large numbers of people are dying after being jabbed for covid — largely the elderly with weakened immune systems.

She believes that around 50 million Americans are at risk of perishing from covid jabs.

Around half the US population has been infected with “the most dangerous spike protein,” she explained, adding:

“We knew the spike protein alone is the disease, so they can all backtrack, because they just injected everyone in the world with a synthetic deadly virus.”

“They injected the poison. The word ‘virus’ means ‘poison’ and they injected it into everybody” jabbed for covid — what she called attempted “mass-murder.”

Earlier she said “I can’t sleep (because of) how evil this is. This is so deadly, I can’t scream it loud enough from the rooftops.”

Walensky, Fauci and other US public officials want maximum numbers of adults and children infected with toxic covid jabs — designed as bioweapons of mass destruction.

I’ve cited and quoted eminent physician, author of over 100 books Dr. Vernon Coleman before and no doubt will again.

In his latest article this week, he stressed how he’s been warning about covid mass-jabbing since last year.

“The lunatics have truly taken over the asylum, and they could kill billions with these jabs alone.”

Jabbing adults with “this toxic brew is madness,” he stressed. But they have a choice.

Nothing remotely warrants mass-jabbing them “with dangerous poison straight out of the witches’ cauldron in Macbeth, and they don’t have the faintest idea what is happening to them.”

“There is absolutely no informed consent, and they are being given an experimental vaccine that doesn’t do what people believe it does, to protect them from a disease which I have proved, in a previous video, is nothing more than the rebranded flu.”

Promoting and using what’s harmful to health is a flagrant Nuremberg Code breach.

But that’s precisely what’s been going on since last December in the US, West and elsewhere.

There’s lots of guilt to spread around among government officials, public health ones, their press agent media — and, of course, Pharma by profiteering from selling toxic drugs.

Coleman stressed that parents allowing their children to be jabbed should be held accountable “for child abuse,” adding:

“Any doctor or nurse who jabs a child with one of the experimental covid jabs should be arrested for assault and child abuse and imprisoned for a very long time.”

Professor of viral immunology Byram Bridle explained that the spike protein in covid jabs “spread(s) throughout the body, enter(s) the spleen, liver, bone marrow and ovaries (and)  affects the platelets which can cause clotting, bleeding, heart problems and neurological problems,” according to Coleman.

Affected antibodies “in breast milk can cause bleeding in infants.”

“Why would anyone have anything made by Pfizer injected into their body,” Coleman added?

Throughout the West, the most diabolical ever mass deception campaign continues without letup.

Getting jabbed for flu now called covid assures irreversible harm and death that can come soon or later.