MANCHURIAN JOE | VIDEO: Confused Biden Asks “What am I doing?” While Shaking Hands With People…Suddenly Kneels in Front of the Crowd 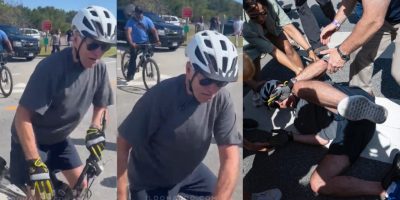 WHO DID THIS? 😂🤣😅| Manchurian Joe Takes A Spill on His Bicycle…🤣😂

Maybe Trump really is actually in control behind the scenes…lol. I mean how else can you explain the innumerable instances where Biden has seemingly been brought out into the public spotlight only to be humiliated. Sometimes it’s subtle, other times it’s blatant and in your face. Their most recent humiliation ritual involved forcing him to do a photo-op as he picked out books in the “Brain Excercises for Demetia” section. I mean cmon man!! How much more blatant can it get?

In another clip he inexplicably just kneels down in front of the crowd. What??!! It’s as if someone in the crowd yelled out one of his “trigger phrases/words” that he had been MK-Ultra programmed with and couldn’t stop himself from kneeling.

You can see plenty more examples of Creepy Joe’s baffling behavior in my “Manchurian Joe” category which includes his strange inauguration ritual where the armed forces who were in attendance decided to LITERALLY turn their backs to him as his motorcade passed by.

This guy is a LITERAL sock-puppet and the person we see that’s presented to the public is clearly an actor(or group of actors) who wear a silicone mask. The real Joe Biden was likely executed long ago.

VIDEO: Confused Biden Asks “What am I doing?” While Shaking Hands With People…Suddenly Kneels in Front of the Crowd

Biden was greeting a crowd when he suddenly asked, “What am I doing?”

Confused? How could he not know what he’s doing when he’s just walking along the rope line shaking hands?

The feeble and confused Biden would also appear confused when asked about Russia (video below).

The local news clip shows much more about the appearance. At the 1:46 point in the video below Biden does something very odd. He repeats a move he made when he met the LA Dodgers at the White House. He kneels in front of the crowd while holding onto the rope.

During a visit to a store, Biden was asked a question about Russia. He was befuddled and couldn’t answer a question so he pulled out notes and fumbled through trying to answer the question.

It’s frightening that America has such a weak leader in Biden.

When will this charade end? SOON!

WHO DID THIS? 😂🤣😅| Manchurian Joe Takes A Spill on His Bicycle…🤣😂