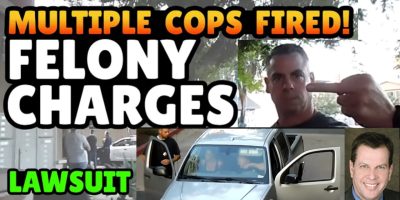 Larry Elder is closing-in on Newsome in the recall polls and has lefty-legislators in the state in full-out panic mode, prompting them to send residents a “beseeching letter urging them not to recall Newsome”. LOL. Here is the original L.A. Times version as well.

I’m not gonna lie, it would be pretty fucking badass and satisfying to see Larry Elder, one of the most gangsta and unapologetic Conservative voices out there, pull this off and leave the libtarded ass-clown contingency of legislators in the state reeling and in a state of shock. He’s a threat unlike anything the left has ever seen in that neck of the woods.

He also happens to be black, one of the big reasons why he’s such a threat. This racial status he enjoys affords him the privilege of being able to immediately stiff-arm any libby race-card-pulling attempts.

READ: California recall: Gov. Newsom on the attack, says Republican candidate Larry Elder is to the right of Donald Trump

Allowing him to spend more time with his boot to the collective throat of wokism in California and not relegated to continually fighting off as many petty smear campaigns. Black Conservatives are poised to become VERY powerful politicians in this political climate. Larry Elder is proving this by his rising profile in this recall race. Someone like him would be able to throw their weight around in the libtarded land of California and virtue signal their way into imposing their will, and will do so effectively simply because of their racial status and the lefts propensity to hold that status above all else like the fucking maniacs they are.

Alas, I had always just assumed that California was simply too far gone and maybe I shouldn’t be getting my hopes up. I’m sure that California of all places has some kind of fail-safe, emergency contingency plan that allows them to cheat at the last second to ensure this much needed and hotly contested seat of executive power. One of the most powerful positions of political authority in the world, with California having the 7th or 8th largest economy on the planet.

Has something recently changed in California as far as the DemonRats retaining their ability to cheat in any state election whenever they need to by however much they need to? Dominion supposedly getting caught during the last Presidential race might have changed that situation for them.

Who really knows? Like I said, I had always just assumed that California had long ago been written off as a loss and the GOP had resources diverted elsewhere for campaigning. The sad reality is that by now, libtardation has all but consumed that beautiful state and I fear it has now become uninhabitable. The same way Portland is about to be written off as uninhabitable, as their murder rate is on the verge of racing record breaking heights for any city on earth.

Have you seen Elders appearances on the Dave Rubin show where he talks about police shootings against blacks? He fucks shit up. That was a while ago actually, but he’s done a lot since then and gained a lot of popularity on alternative platforms like GAB and Rumble.

I don’t actually expect too much tangible change, lol, but it’d be like a virtual win. I can talk shit about on Twitter for a while and trigger countless libtards. It would be a stinging loss for them. Is that petty? Maybe. Matt at Quantum of Conscience would say that’s “entry level truther” behavior. May-be. But at least I’m not falling for any cointelpro shit anymore. Like that Wellaware1 guy. Lol. He still had some good stuff though. But I got through with that phase and at least I know I’m being petty and delusional by celebrating the potential victory of an establishment Conservative political pundit and to actually expect that things could ever change in California of all places. Even if Larry Elder is one of the better and most agreeable personalities to come around politics in a while and contend for such a big-time position as the Governorship of Cali-fucking-fornia.

An Elder upset-win would be a HUGE blow to the left. HUGE. Fair elections in California, and in general, are one of the lefts biggest fears. And don’t try telling me that RINO Arnold Swarztenegger ever honestly represented Conservatives in that state when he was Governor. Have you seen the shit he said recently? “Screw our freedoms”? What?…..screw you Arnold. What… are you seriously friends with Alexander Vindman now. Aaaaahaahaha. Did you set out to go shopping for the biggest loser on earth to collect as some kind of novelty item? What are doing man? He’s like the biggest toolbag the post-modern news media has ever seen. Go fuck yourself you Austrian-twat. Go hoard some S.S. gold and shoot up some more steroids with your square-jawed serpent-seed tranny Kennedy wife. Skynet fucking sucks and you are dead and gone. Replaced long ago. Copied, killed, buried, swapped out, microchipped, image hijacked, image-defiled… ritualistically…. star(tombstone) etched on “Walk of Fame”. Larry Elder is a real Conservative and would be poised to be the first real one in modern times.

Conservative Larry Elder is rising in California and Democrats are terrified.

Gavin Newsom and his supporters, including the liberal media are now taking this very seriously because they believe Elder could actually pull this off.

The liberal Los Angeles Times newspaper has resorted to begging their readers not to recall Gavin Newsom.

The LA Times begs Californians not to boot Newsom

We’re one month out from the California recall election and the polls have continued to tighten, though most of them predict Newsom surviving by a slim margin. Perhaps it’s the unexpected closeness of the vote that moved the editorial board of the Los Angeles Times to publish a beseeching letter to Californians, urging them to not be tempted into opting for some new blood in the Governor’s mansion.

Their concern for the welfare of the state (or should we simply say “the welfare state?”) seems touching, but the editors also don’t do a very good job of hiding their real reason for wanting to keep him. Also, when they get around to attempting to defend Newsom’s performance as governor during his first term, it comes off as more of an apology for him than a defense. Here’s their opening salvo:

Ballots for the Sept. 14 special recall election have been mailed to 22 million California voters. The ballot poses two questions. The first is whether Gov. Gavin Newsom should be removed from office.

The correct response is a strong, unequivocal no.

Removing Newsom and replacing him with an untested and unprepared alternative who wouldn’t represent the values of most Californians would be a disaster. It would doom the state to months of political and bureaucratic dysfunction and economic uncertainty. And for what purpose?

If Elder wins this race, it will send a nuclear shockwave through American politics.