This LA Quinta Columna channel, along with the equally fascinating @unicosobreviviente guy on TikTok who claims to be stuck in the year 2027 and shows videos in Valencia Spain of an eerily empty city with no other people left on earth, has forced me to brush up on my Spanish. The unicosobreviviente guy recently posted the below YouTube link on its official TikTok profile. 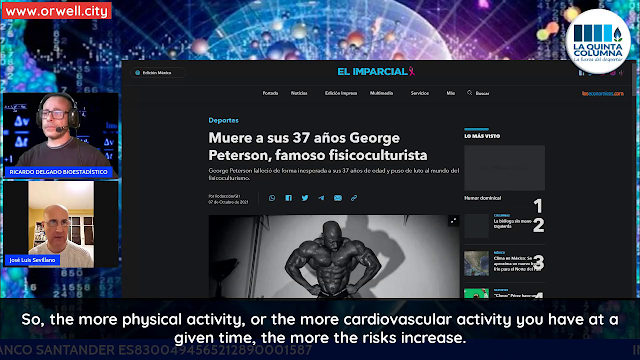 In its most recent program, La Quinta Columna made reference to the alarming number of bodybuilders and high-performance athletes in general that experience sudden death after having been inoculated.

Do not miss the details of his explanation in the following video that Orwell City brings on this occasion.

Ricardo Delgado: Let’s go with this avalanche. There’s also an avalanche of bodybuilders who are losing their lives. And I’m thinking that this, José Luis, is because bodybuilders, especially, do strength work. And with strength work, above all, the heart performs a lot of activity.

Ricardo Delgado: All this can be very much related to graphene, which has an affinity for the heart, as we already know. And these people give the heart more electrical activity. Because to move the amount of blood required to nourish all that musculature, it logically has a lot of activity. This is something very well known within the bodybuilding field. So there are at least 11 known bodybuilders who have died within one or two weeks, as far as we know.

Dr. Sevillano: This is the alert that we have been… Listen carefully. There’s something we’re doing lately. It’s just that this is unprecedented. The fact that scientific information is being sought in the networks is unheard of.

Normally, laboratories don’t do their studies in this way. And yet, many people are already doing studies through the information they see on the networks. Remember Astrid Stuckelberger, this woman who was part of the WHO, and that’s into graphene now. Doing studies on her own, as well. As she says in the video you shared the other day, we aren’t allowed to do clinical studies. Neither do they fund them, nor do they allow you to perform them. Not even think about asking for authorization.

Then, the way to get information, right now, is through networks. And what we do is, let’s say, a ‘sampling’ of what is happening through the information that reaches us through each channel. Channels that are, more or less, numerous in terms of subscribers. But we’re receiving information that is still a sampling that at some point can be transformed into a study. But this alerts us. The fact that people are losing their lives suddenly, especially sportsmen, is something that we didn’t see so often before. Right, Ricardo?

It’s that this was not seen. You didn’t use to see so many young people dying and appearing in the newspapers. Neither young people nor bodybuilders. That’s to say, the more physical activity, or the more cardiovascular activity you have at a given time, the more the risks increase. All these cases are arrhythmias.

In general, they don’t lead to sudden deaths. But these that we see are all sudden deaths. People die suddenly from exercise. It’s known that if graphene attaches to your heart, it triggers a fatal seizure/arrhythmia, and bye-bye. And they go on to a better life. And this is due to this mechanism that we’re talking about. The graphene must become hyper-excited as body temperature rises and myocardial activity (electrical activity) increases. This should generate arrhythmias that lead people to death. And, for that reason, the media said that we had to be careful with doing sport and that it was not so good for our health. In other words, they’re trying to make people not realize this. They’re trying, in a way, not to make them aware of it.

If you like my articles and the videos you find here and, if you can and feel like it, you can make a small donation. Your support is always more than appreciated.

Follow Orwell City on Telegram. Thank you for reading!