The Golem of Prague | Golem: Creating an Artificial Lifeform Through Occult Magic

So we have these Golem & Homunculus “creatures” that were apparently commonplace at certain points in antiquit and were conjured up via some combination of genetic and alchemical wizardry. Must we assume that some kind of alchemical application is incorporated in the Robotoid manufacturing process that they’ve supposedly mastered over in Russia according to Dr. Peter David Beter?

At one point in the below video “Golem: Creating an Artificial Lifeform Through Alchemical Magick” he mentions that Artificial Intelligence could be considered as the next type of Golem, though I disagree and view A.I. as fundamentally “Alien” in nature to conscious biological life and even to an abominable simulacrum of life it would find itself too obtuse in form and function to ever use in the same breathe of. Golems and Homunculus are still based upon the blueprints of genetic life, even if loosely. While with A.I., we don’t even know what’s is doing most of the time and will never be able to understand it’s incredibly complex architecture of abstract thought processes. The scientists have even admitted that when these A.I. intelligences communicate with each other they have no idea what they are saying to each other.

I think just about all “Sciences” are arguably “alchemical” anyway. I’m pretty sure that most of these supposed “dark” Magickal occult Sciences aren’t exactly as inherently evil as has been traditionally portrayed by the modern Satanic Christian establishment(most admittedly are too oblivious to realize it’s a blasphemous and Satanic religion) and the parasites up top have deemed it inopportune to allow for the common folk to eventually realize the utility of so many of these lost arts and alchemical technological applications and just how liberating to their clutches such applications could prove to be when yielded by an able and willing “Sorcerer”. A Sorcerer simply refers to someone who harnesses and utilizes the “source” power of this universe. The ether. I’m not saying to go out and buy a Quiji board or to start conducting ceremonies to summon the dead. Use your own discernment. Don’t go try making yourself your own Homunculus minutes after reading your first text on the subject.

Now, this doesn’t mean you might not encounter some dangerous entities in your travels, but one must always assume some amount of risk in the pursuit of the most valuable pieces of knowledge or “Jewels” as some call these most precious morsels of insight into the secrets of the universe. There are ways to protect yourself and they must always get your consent in the end, you just need to be crafty and careful enough not to fall for any of the many traps that have been laid along the way for us souls trying to thwart our current apparent indentured servitude inside this holographic matrix simulation(EARTH: Experimental Avatar Reality Training Habitat). We are apparently here to serve as energy and data farm animals. They don’t only siphon off our excess loosh energy but are also recording large amounts of valuable high grade biometric data about the personalities and daily interactions carried out within each soul-encapsulating meat suit and stored within each suits “brain”. This accumulation of so much valuable data would allow for them to program more and more realistic simulacrums of human beings or any “being” for that matter. Just like how any software program requires BETA testers, humanity is clearly and open-source project by the looks of it.

The Golem of Prague

The Maharal of Prague created a man-like creature 500 years ago for the protection of the Jews.

The Maharal Yehudah Loew, chief rabbi of Prague 500 years ago, was believed to have created the Golem.

The story of the Golem is one of the most famous stories of Jewish history. Tradition recounts that when persecutors rose up to attack us, the Maharal Yehudah Loew, chief rabbi of Prague 500 years ago, created the Golem, a manlike creature made from the dust of the earth, endowed with “life” by means of a secret Kabbalistic formula. Through the Golem, the Maharal brought about miracles for the protection of the Jews.

A famous story about the Golem deals with blood libels. Back then, Christian priests, especially the priest Taddeus, claimed that Jews secretly killed Christian children and used their blood for their Passover matzot. After Taddeus’ sermons, the Christian townspeople would pour out of church, seething with hatred for the Jews.

The Maharal, in desperation to save the Jews from slaughter, prayed for guidance. He received an answer at night in a vision. He was given 10 Hebrew letters, signifying words meaning “You will create a Golem, a thing of clay and destroy the wicked!” 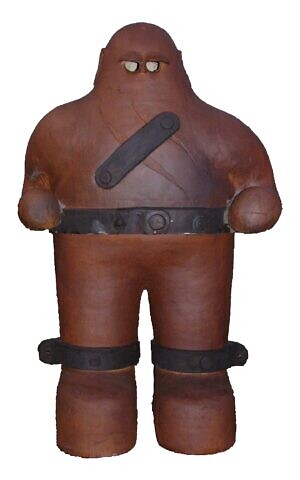 The image of the mythical Golem of Prague was not a monster, but a gentle soul that helped protect Jews of Prague.

The Maharal and two friends went to the Moldova River and began to shape the soft clay. They created a figure that resembled a man.

The first friend circled the Golem seven times while reciting certain holy letter combinations. The Golem began to glow. The second friend did the same thing, and the glow was replaced by a watery vapor. Then the Maharal also circled the Golem seven times and the three of them cried out, “And God blew the breath of life into his nostrils.” The Golem’s eyes then opened. The men discovered that the Golem had great strength and also the ability to disappear.

The Maharal told the Golem, “We created you with God’s help to protect the Jews against our enemies. You must obey my orders in everything! The Golem could see and hear but was mute. He nodded his head in agreement.

The Golem was not a monster, but rather a gentle soul that had no independent thought but was morally upright. He did exactly what he was told until he was told to stop by the Maharal. When asked to bring water to the kitchen, he continued to bring water until the kitchen flooded and was then told to stop. When he was told to catch fish, he fished all day, and when told that there were too many fish, he dumped the entire basket of them back into the lake.

One tale of the Golem dealt with a Jewish girl named Miriam, who went to Father Taddeus to become a Christian. As Pesach approached, Miriam packed her bags and raced out of her house.

At the same time, a Christian girl who worked for Miriam’s family quit and was missing. She had returned to her own village jobless. With that fact in mind, and having Miriam under his control, Taddeus forced Miriam to concoct a story that the Maharal and his friends had killed the missing girl for her blood, and they had a bottle of blood to make matzah. In addition, Miriam said that one of the men told her father that the girl who was missing would be replaced in a few days.

The next day, the Maharal, a friend and the Golem were arrested. Before the trial began, the Maharal, who was told in advance about Miriam’s fabrication, found a mute man in Prague who matched the Golem’s figure, sedated him, and put him in the Golem’s bed, so it looked like he was the Golem. The Maharal then told the real Golem to go to the girl’s village with a letter that said she would have her job back with a raise if she would return to Prague.

With the Golem’s special powers, the missing girl returned with him in the middle of the trial. The Maharal and his friend were then declared innocent, Miriam was sentenced to six years in prison for perjury, and Taddeus was discredited. 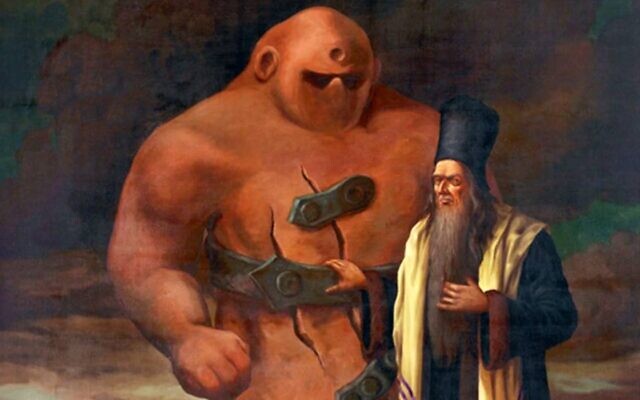 An artist depiction of the Golem of Prague.

Most important, the Golem performed many acts of brute strength to defend the Jews. After many other incidents involving the Golem, and once the blood libel battle was over, the Maharal no longer relied on the Golem. With his two friends, they followed the same process used to create the Golem, but in reverse. They wrapped the Golem in a tallit and hid him in the attic of the Maharal’s synagogue, available to return when needed. No one was told where the Golem had gone. Only a few in Prague knew the truth, and today many believe that the secret incantation to bring him back could only be enacted by the Maharal.

In 1921, when my grandparents and their four small children – one of them my mother – emigrated to the U.S. from Romania, they stopped in Prague. They knew the story of the Golem, and my uncle told me that they went to the place that housed the Golem but, alas, they couldn’t find him. Without the Kabbalistic formula, known only to the Maharal of Prague, the Golem will not be brought to life, and thank G-d today we are not desperate for his return.

Chana Shapiro contributed to this story.