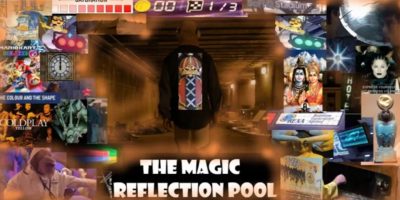 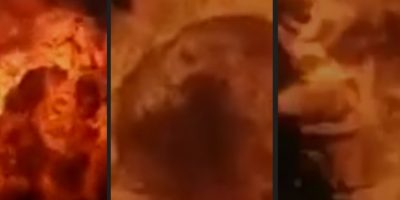 FACES IN THE FIRE: Pareidolia or Demonic Inhabitation?

I’m sure most of you have seen this on the Twitter and Telegram feed already, but I figured it deserved to be archived on the blog as well.

My guy Primordiallian Fresno, who’s opinion I value tremendously and who helps to keep me grounded at times, is convinced that it’s just the back of her head as she’s facing down, combined with the effects of the face mask she was wearing and some light and shadow effects. I’ve taken a look at the enhanced image that he sent me and zoomed in and out over and over, and I’m sorry, but no matter how many times I look at it, all I see is a Doja Cat entity in mid-shift.

That’s exactly the same kind of effect we saw in the famous Eustice Mullins shapeshift footage where you can see the texture of his hair on the top of his head sneakily blend into the crest of the Reptoids snout and cranium. In this case the facial features of the Doja Feline entity morphed into the top of the woman’s head. It would make sense that it would blend its natural facial colors with similar color profiles built into your avatars appearance, which is what caused the glitch-out, being that the Doja had a black face of the same color tone as her hair. I believe each species perhaps has their own shape-shift tech and the tech used here is different from the liquid crystaline based technology we see that causes the zebra like patterns to appear. This tech has more of a textural transmorphic effect that blends similar colors and textures to create the facade.

I see a shape-shift event here. If it didn’t look exactly like a Doja I wouldn’t be as keen to believe that, but I mean c’mon, that’s way too coincidental and I don’t play that coincidence shit anymore. I admit that I have a wild imagination and have always been able to see all the faces in the clouds, and I’m a big fan of Roger InKC who finds all sorts of pareidolic effects embedded in a variety of different objects and structures in our world. But I don’t think that’s what happening here. I think that the veil is continuing the lift and these entities are finding it increasingly difficult to hold their human form. I really hope that YahushuaBenDavid is right and that the veil is about to be crashed essentially and once the simulation breaks down we will get our memories and original Astral bodies back and the powers that come with them. That’s the storybook version of the ending at least. If something like that does indeed happen, I’m sure it will be a bit more terrifying and harrowing than expected and we will all be in an extra vulnerable state at this moment. We need to make sure to stay vigilant and fearless and not allow any entities to deceive us into once again imprisoning ourselves in some bullshit simulation that’s designed to commercially harvest our energy.

Don’t go into the light, don’t go anywhere with Jesus or the Virgin Mary, don’t follow Muhammad or Buddah or Krishna or Yahweh or Enki even Cronos himself to any damn place. Politely tell them to fuck off and make it clear that you are a sovereign being and any attempt to usurp that sovereignty will be remedied with a scorched earth no prisoners protocol.

So anyway, some of you might be asking, “What the fuck is a Doja Cat?”. I’ll do my best to show. Tamara Magdalene & YahushuaBenDavid are of course the two who I learned about them from. Certainly not an easy subject to do a search on so because of the dumb bitch recording artist known as “Doja Cat”, so I’m going to have manually retrieve everything that I can remember and delve deep into my video archives since both those channels have had so much content removed from YouTube.

I remember Tamara pointing out a Doja Cat shift at the very end of the original Westworld promo from 1973, but I don’t see it this time around. Makes me wonder about some of her other pieces of footage. She is Lilith, so mixing truth with bullshit is her specialty. I did all this work to find the exact spot where I remembered seeing the Doja, but it’s not there this time around.

I believe that Lil Kim was the original Doja Cat, or is a Doja Cat along with the actual current artist known as Doja Cat who is a Doja. They could even be the same entity for all I know, but at least the same Feline species. I feel like I’ve seen that face before in other paranormal footage but I can’t think of it at the moment.

FACES IN THE FIRE: Pareidolia or Demonic Inhabitation?