It amazes me how many people(usually low-IQ bi-racial college girls) are willing to get behind the idea of going full blown scorched-earth racist towards white people as some kind of perceived remedy for what by now has been an ancient and heavily meddled-with historical narrative of slavery in North America.

They think have it soooo bad and that everyone is sooooo racist, so much so that they need to go around hoaxing hate crimes in their desperation to seem as oppressed and marginalized as they claim to be. It’s not working. Bubba Wallace was the funniest to watch try to make himself out as a victim. They do this hate crime hoaxing crap a lot. Even LeBron James tried and failed once. Not as spectacularly as Jussie Smollet “the actor from France” did. But it was still bad and he should not have been allowed to get away with it the way he was.

I would want to ask these victim hood-procuring brats the following questions:

1.) Did you know that blacks also owned slaves and even entire plantations in some cases?

2.) Did you know that other ethnicities including whites were also enslaved alongside blacks?

3.) Did you know that there were already “black” people inhabiting the America’s when colonists first arrived from Europe and far fewer were imported from Africa than the official narrative indicates?

4.) Did you know that it was Middle Eastern(Jews & Arabs) slave traders who were responsible for most of the acquisition and distribution of human cargo that took place in the Caribbean(mostly in Havana) destined to be sold up in North America? Slaves that they purchased from African Chieftains who sold their prisoners of war to the foreign slave traders. I’m sure that the Jesuits were one of the main players in that game too, but the point is that it wasn’t a “white” trade. Jesuits are Jews anyway as far as I’m concerned. They worship the same dark Babylonian forces.

My regulars are likely yawning since I’ve spoken on this repeatedly, but in the rare event that any Libtard Social Justice Warrior is actually reading this, I’d like to ask them how hypocritical they must feel to have become full blown racists themselves, all in the name of a cause that’s based on fallacy-laden historical narratives? I know most Libtards and millennials are too dumb to process most of this information, but it was worth a shot.

Any theoretical policy that interprets the causation of any particular problem as some kind of subconscious long-term micro-aggression instigated by an entire race of people is just flat out insane and you should immediately be placed in Special Education classes if something that stupid and that hateful actually resonates with you. I apologize for even using the term “micro-aggression”. It has no place in the English language. Nor does Critical Race Theory have any place in the public school systems. Though I fear it’s already too late and the damage has been done. These little assholes have been running around with their masks on and ruining the world for the better part of 2 years by now. All we can do is wait for them to die from their jabs I guess. There are just too many of them. Hopefully sooner than later.

Black College Student Announces Black-White Segregation Is Back On

As parents around the country increasingly become fed up with left-wing hacks running school boards, more are beginning to take action against board members who refuse to listen to reason and respond to concerns. 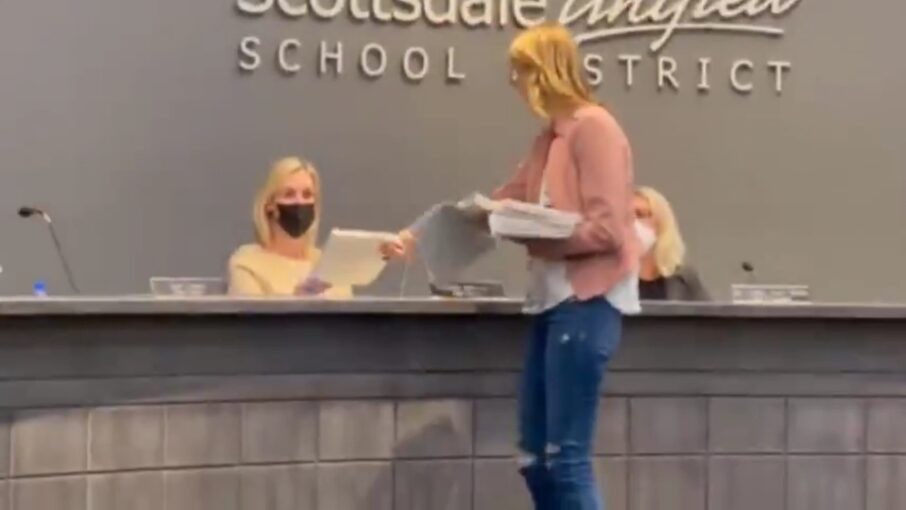 In particular, parents are outraged at the adoption of an explicitly anti-white critical race theory curriculum, ridiculous and pointless COVID masking, tyrannical mandates and the inclusion of sexually inappropriate books and materials in school libraries that includes illegal acts of pedophilia.

In fact, parents and activists have just served members of the Scottsdale (Arizona) Unified School District with surety bonds totaling $1 million (that is, 10 parents have filed bonds of $100,000 each, totaling $1 million for each board member) as they move to get rid of several policies.

Leigh Dundas and Miki Klann speak to the Scottsdale Unified School District in Arizona. During the meeting, Miki declares her intention to file a claim against the Governor’s surety bond on behalf of the SUSD board members. Each member of the board will be charged with practicing medicine without a license, child abuse, segregation and inappropriate sexual material in the school libraries.

In order to resolve the problem, the board members must:

– Remove all mask mandates and recommendations

– Remove all inappropriate sexual material from the libraries

In addition to inappropriate content, behaviors, and mandates, the SUSD board has had its problems in the past.

For instance, in November the board met in emergency session and voted 4-1 to remove Greenberg from his post following reports that he distributed “dossiers” on parents who were showing up at board meetings and voicing opposition to its left-wing policies.

The board voted to elect Patty Beckman as interim president. The ‘dossiers’ included photographs and personal financial information on some parents, US News reported.

“We do not have all the facts at this time. To make a decision without those facts that’s in the best interest of the district is simply not possible,” Greenburg said. “I strongly support the investigations that have been announced both publicly and privately.”

“When I first saw the contents of the Google Drive and I saw my 8- and 10-year-old’s photos, that was terrifying. And like, what’s he doing?” mother Amanda Wray told AZFamily.com.

“But he has pictures of my vacation home, property records. I’m not a political opponent, I’m an involved parent and that is threatening to me and it makes me wonder why and what he was planning to do with those photos,” she continued, adding she was “disgusted” by what she saw.

In the case of one woman, Wray said that whoever created the dossier “took her photos and superimposed it over a lynching and I can tell you, she’s distraught by this and it’s disgusting.”

She went on to say she thinks some parents are being targeted because they sought to have Greenberg recalled over the district’s manifestly stupid COVID-19 policies, according to AZ Family.

“We’re not anti-mask, we’re not anti-[jabs]. They’ve painted us that way because it fits their inflammatory narrative. We’re all for parent choice and really, transparency,” she said.

The World Economic Forum (WEF) has come under fire for a video which initially appears as a neutral explainer on Critical Race Theory (CRT), only to quickly shift into a full-throated endorsement of the ideology.

CRT charges an entire demographic with a collective crime, uses the charge as grounds for framing individuals within that demographic of perpetrators of that crime, and then seeks to strip condemned individuals of rights, dignity, and equal protection based on that charge (h/t).

The WEF video defines CRT as a theory “first developed by US legal scholars in the 1980s” which “argues that the laws, rules and, regulations that govern society today have been shaped by the historical subordination of people of colour and that this is a driving force behind racial inequality today,” according to Breitbart.

As an example of the supposed racism embedded in every fiber of America’s institutions, the WEF points to the high number of incarcerated black males throughout the country.

“Take the US criminal justice system, for example,” it says. “While everyone is seen as equal under the law, Black Americans are imprisoned at 5 times the rate of white people.”

“CRT says this disparity is a legacy of America’s racist past,” but that opponents say it “paints all white people as bigots.”

The video then positions CRT awareness as an honorable pursuit. Watch what opponent Chris Rufo described as an “Insane pro-CRT propaganda video.”

Others condemned the WEF as well (via Breitbart):

“This PROVES CRT is the revolution. I’ve been wrong this whole time!” he mocked.

“Why would the World Economic Forum come out in support of Critical Race Theory?” asked author and mathematician Dr. James Lindsay, who warned last month that CRT activists aim to dismantle the U.S. and establish “a total dictatorship” of the so-called “anti-racists.”

“Because they’re the ones who want to divide our society with this Marxist Theory or any other tool they can use to break the world and seize power,” he said.

Sen. Ted Cruz’s (R-TX) national security adviser tweeted “I can’t believe you’re advocating for ‘equality’ at the expense of equity” in 2022. “You’re either on board or you’re not. Be better.”

Read the rest of the comments here.