The Last Card and the Fifth World of Hopi Prophecy | Does This Petroglyph Depict the “Ant People / Anu-naki” Taking the Hopi Underground to Safety Just as Their Oral History Suggests?

False idol is false idol, the creator does not need a middle man 🙄dumb on 🐑🤨👺👹 | Worshipping the image of a long haired Caucasian man nailed up onto an unfolded Saturn Cube w/ a Babylonian Sun disk halo behind his head = BLASPHEMY & IDOL WORSHIP

I’d seen countless photos of sensational petroglyphs that can be found in the 4 corners region of the American Southwest, but I had never seen this one(ABOVE) which clearly depicts people being transported below the surface of the earth by the ant people, right in line with the oral history of the Hopi.

The Hopi have one of the most fascinating oral history to speak of. Tom Horn talks about some of the otherworldly and bizarre tales that were told to him by a Hopi elder and recounted tales of inter-dimensional giants who emerged from portals and ravaged and terrorized the people as well as accounts of brave warriors battling other more “Alien” beings who they straight-up referred to as “Alien Gods” without batting an eye.

The documentary “Holocaust of Giants” goes into this in great detail and I highly recommend the entire “True Legends” series and its other two parts: “The Unholy See” and “Technology of the Fallen”.

The Hopi legend also recounts an interaction that their ancestors had with these ant-like people who they called the Anu-naki(anu = ant & naki = friend). These creatures were supposedly very wise and taught them different crafts and provided them with valuable knowledge(the same story we hear everywhere). The Hopi claim that these creatures emerged from beneath the earth in order to warn their people of a pending cataclysmic event and helped to shuffle them underground and into their secret lair so they wouldn’t be destroyed by the looming disaster.

*On a side note I had always thought it was exceedingly interesting that in the HBO series “Westworld” they depict a tribe of native people who also experience visitations from a Alien-like/looking people(the park staff wearing full body suits) who also emerge from beneath the earth and who some of the natives end up ultimately realizing are in fact their creators. Could they be trying to tell us something here? I’ve long speculated on the many hidden messages embedded within that show.

This petroglyph appears to depict what looks a bunch of people riding some kind of tram system on a track that transports riders from the surface down into the crust of the earth and seemingly out of harms way.

The Last Card and the Fifth World of Hopi Prophecy 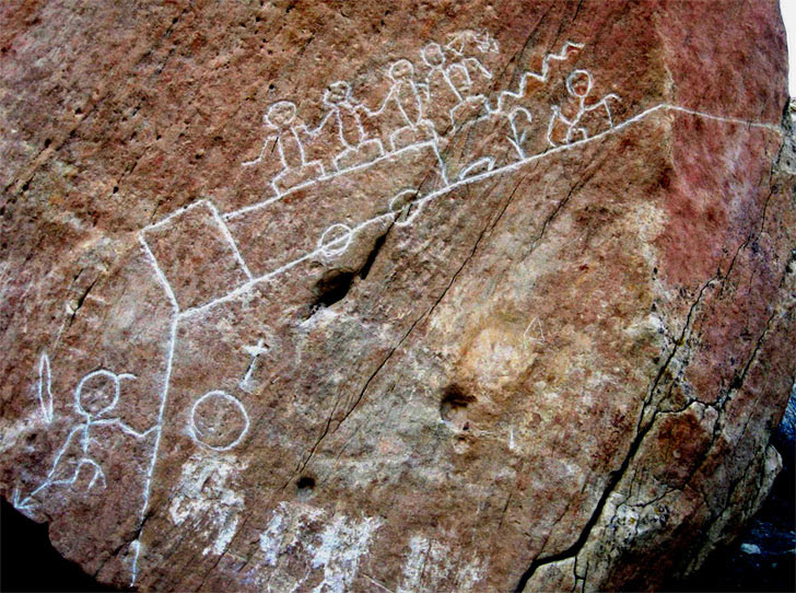 ​How does Hopi prophecy ties into what is going on in our world right now?  Recent current events have all pointed in the same direction from two different perspectives.

Dr. Carol Rosin warned us about the weaponization of space through her professional relationship with ex-Nazi scientists, Dr. Wernher von Braun, who warned Rosin about the following external threats that would be created as a false flag by the United States government:

“They’re inventing enemies he (Von Braun) said, against whom they are going to build this space-based weapon system—the first of whom was the Russians which was existing at that time.  Then there would be terrorists, then there would be third world countries, now we call them rogue nations or nations of concern.  Then there would be asteroids.  And then he would repeat to me over and over ‘and the last card, the last, the last card would be the extraterrestrial threat’…you will find that there is going to be a spin to find some enemy against whom we have to build space based weapons and now we should expect the spin.”Space-based weapon system: Reagan’s Star wars Program.

Terrorist threat: 9-11
3rd Word Countries threat: North Korea
Asteroid threat: Elenin (while not classified as an asteroid, the apparent government psyops would assimilate Elenin into this category)
Extraterrestrial threat: To be announced.
Ronald Reagan was the first fear-mongering world leader to instigate the star wars propaganda (most likely ) through his puppetmaster Vice President, George Bush: Hopi prophecy foretells of specific signs that points towards the fulfillment of their end time prophecy.  Many of these signs have already come to fruition.

According to Hopi prophecy:
First Sign: We are told of the coming of the white-skinned men, like Pahana, but not living like Pahana men who took the land that was not theirs. And men who struck their enemies with thunder. – Columbus “discovering” America
Second Sign: Our lands will see the coming of spinning wheels filled with voices. In his youth, my father saw this prophecy come true with his eyes — the white men bringing their families in wagons across the prairies. –
Third Sign: A strange beast like a buffalo but with great long horns, will overrun the land in large numbers. These White Feather saw with his eyes — the coming of the white men’s cattle.
Fourth Sign: The land will be crossed by snakes of iron.
Fifth Sign: The land shall be criss-crossed by a giant spider’s web.
Sixth Sign: The land shall be criss-crossed with rivers of stone that make pictures in the sun.
Seventh Sign: You will hear of the sea turning black, and many living things dying because of it.
Eight Sign: You will see many youth, who wear their hair long like my people, come and join the tribal nations, to learn their ways and wisdom.
Ninth and Last Sign: You will hear of a dwelling-place in the heavens, above the earth, that shall fall with a great crash. It will appear as a blue star. Very soon after this, the ceremonies of my people will cease.

The “Powers That Were” Are Paying Attention.
Those in power are most certainly aware of the Hopi prophecy as well as all other prophecies as evidenced by the building of numerous underground bunkers throughout the world, as well as the implementation of the underground seed vault.

If you follow free masonry to the highest levels, you’ll find the motto “ordo abchao” which means order out of chaos.  You will also discover that they follow the Luciferian Doctrine, which is why there is a forced agenda to follow, as evidenced by the attempted implementation of codex alimentarius, Agenda 21 and the North American Union.  In other words, they are trying to force a simulated recreation of the bible’s Revelations chapter in order to achieve their perceived enlightenment as fulfilled through the Luciferian Doctrine.

False idol is false idol, the creator does not need a middle man 🙄dumb on 🐑🤨👺👹 | Worshipping the image of a long haired Caucasian man nailed up onto an unfolded Saturn Cube w/ a Babylonian Sun disk halo behind his head = BLASPHEMY & IDOL WORSHIP