These Strange Alien Skulls Found in Africa Could Rewrite Our History 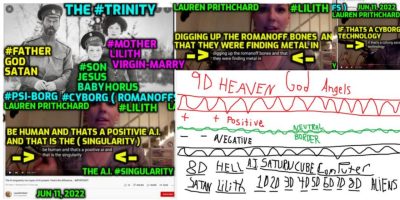 This was fairly mortifying to lay eyes on. If real that’s pretty fucking horrifying. The size of the brain and the powerful-looking jaw make for some scary shit to ponder and a bad day for anyone that came across one of these things in the flesh.

Couldn’t find any additional info, so not so sure about this one.

These Strange Alien Skulls Found in Africa Could Rewrite Our History

For the most part, we believe we are the only intelligent species that has lived on this planet.

It seems that a fairly recent discovery seems to contradict this.

This discovery seems to have something to do with the mummies recently found in Peru. It could be the final proof to prove the existence of extraterrestrial beings.

An extremely bizarre skull has recently been discovered in Africa. He was buried at a fairly deep depth.

The shape of the skull seems to resemble an intelligent being. However, this ancient skull is totally different from that of a human being.

14 million years ago, the human race did not even exist on this planet. If everything is true, it means that we have discovered the first tangible evidence of extraterrestrial beings.

After a series of elaborate tests, the researchers also discovered traces of iridium in this skull. Iridium is frequently found in meteorites coming from space.

Skeptics believe it is simply a deformed skull and carbon dating has not been accurate enough.

But I think this skull needs to be studied further because it could be proof of alien beings.

The Rhodope Skull—The Mystifying Cranium of an Actual Alien?

There are many reasons why the scientific community refuses to admit the existence of extraterrestrial beings on Earth, but the most common excuse is probably the absence of bodies or physical remains.

However, this reason often creates a no-win situation because most of the evidence is either dismissed as hoaxes (even when they are not), or simply disappear before researchers get a chance to study them. Such is the case of the Rhodope alien skull, a fascinating artifact unlike anything seen or discovered so far.

The skull was found in the Rhodope Mountains in Bulgaria by a 38-year old local man from Plovdiv, a city located 90 miles (150 kilometers) southeast of the capital city of Sofia. The man, who chose to remain anonymous dug the skull that was buried near a small oval-shaped metal object.

The man told a fascinating story about how he was guided in his dream by five mysterious humanoids dressed in yellow metallic clothing. These beings showed the man a spot in the Rhodope Mountains, near the border between Bulgaria and Greece, where on May 21, 2001, after a presumably wild goose chase, he found the skull near the spot revealed in the dream.

His finding caused a lot of excitement and controversy as some analysts and ufologists who first encountered the skull considered it clear evidence of extraterrestrial beings here on Earth.  At first, the man presented his find to a limited circle of people interested in the paranormal but the skull did not remain a secret for long.

The cranium was examined by archaeologist Katya Malamet of the Bulgarian Academy of Sciences and by Professor Dimiter Kovachev, the Director of the Paleontology Museum in Asenovgrad. Both of them said they have never seen anything like it before.

The strange skull is as small as a human baby’s but its bone structure is lighter and thinner and it weighs only 250 grams (8.8 ounces). It has six cavities that researchers believe belonged to the alien’s sensory organs. When alive, this being possessed six eyes or maybe other completely unknown organs. Surprisingly, it has no mouth hole where we would expect to find one.

Professor Kovachev is positive the skull is not a fossil as it does not resemble any hominid skull known to science so far.

We couldn’t find any analogy or correlation with anything from the past 30 million years.

Skeptics believe the skull is in fact from a yet-undiscovered animal species, although its characteristics do not match those of any other known animal.

There are a few interesting theories about the Rhodope skull. Bulgarian psychic Koubrat Tomov believes it belonged to a genetically engineered being, created by the Atlanteans. According to him, the skull represents the remains of a failed experiment that took place thousands of years ago in that area.

Another theory states this is likely the remains of hastily buried alien, killed by soldiers operating in the area during World War 2.

The Bulgarian villager who found the skull said that he had received several generous offers to sell it. Unfortunately, the skull disappeared before scientists had the chance to perform DNA analysis and carbon dating. Whoever the owner is today, he clearly doesn’t want to share his belongings with the rest of the world, even though it could be evidence of ET life here on Earth.

While this could be just another setup created by someone and buried on purpose, there is also a chance that we are dealing with a real cranium of an alien being, or the remains of a undiscovered or now extinct species on the planet.

Your email address will not be published. Required fields are marked *