I didn’t realize how long the “Avenue of the Sphinxes” actually was and that it connected the Luxor and Karnak temples. That’s the area of Egypt that’s really worth visiting. Those riverboat tours in “Upper Egypt” which is actually the South of Giza down the Nile is the thing to do apparently and in a much better area to visit than the Giza area from what I hear.

Not sure why this guy is so obsessed with pointing out all the rest areas along the way. Lol. He gives a good tour though and some good tips and inside info for anyone thinking about visiting the area. He films himself walking the entire length of the Avenue which was just recently opened for tourists to traverse the entire road all the from Luxor to Karnak. It’s been closed for a long time apparently but the Egyptian authorities recently built a bunch of bridges that go across the Avenue and actually evicted a bunch of people from their homes to build the infrastructure they needed after excavations that took place from 2017-2021 revealed the true extent of the site. They of course held a bunch of creepy occult rituals upon completion of the Avenue.

Look at all the MUD from the vintage pictures. Look at how high the rubble pile reaches at entrance of Luxor and at the Abu Simbel site. I put together a ton of vintage photos from Egypt for you below. I also made a playlist of all of Vlad9vt’s videos of vintage photos of ancient Egypt.

Vintage postcards of Karnak and the Avenue. They seemed to have been much more closely spaced together in their original “Mud-flooded” configuration.

This statue at Luxor looks like it’s been charred by some kind of intense high heat event. You can also see the immense blocks scattered all over the ground and the utter devastation that’s apparent in most of the photos.

I know we like to make fun of the Abu Simbel site around here and accuse it of being a Masonic ruse built in the 1700’s for ritualistic purposes, but the photo of the sand and debris piled high up on the face of the statutes at the original site is pretty impressive. Certainly looks like the whole mountain that the temple was built upon might have been a giant building at one point and all that rubble is leftover from its ancient collapse.

You can see them rebuilding the site with plaster in this 1950 AP News reel via the BBC. All the ancient sites in Egypt have been thoroughly messed-with and more or less ruined via what has been countless grotesque “restoration” efforts by Egyptologists and the Egyptian authorities over the years that usually involve smearing plaster all over priceless stones antiquities and hastily rebuilding ruined ancient structures, both defacing the artifacts and destroying lots of valuable evidence to what the original form of many of these structures and statutes were. The ancient Egypt that we are presented with today more closely resembles a Disneyland theme park tourist attraction than a properly preserved and bona-fide “ancient” Archaeological site. 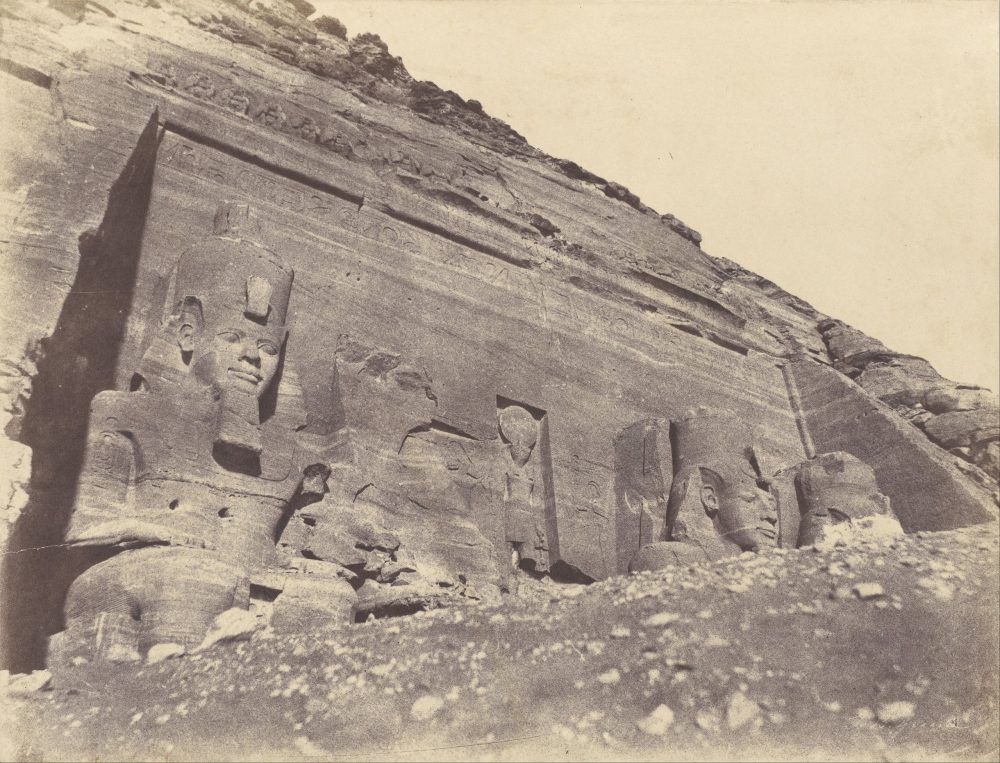 Who said you need a time machine to travel back in time? Check out this stunning collection of rare, vintage photographs of ancient Egyptian Temples.

Over a long period in history, the ancient Egyptians built incredible structures that stood the test of time.

While the Egyptian pyramids are perhaps the most famous of constructions built by the ancient Egyptians, the land of the Pharaohs and golden sands is known for many other structures.advertisement

In ancient Egyptian belief, temples were seen as houses for the gods to whom they were dedicated.

The first temples —shrines— appeared in the fourth millennium BC in Lower and Upper Egypt.

Never miss a news release from the Curiosmos team.I agree to receive email updates and promotions.Join the newsletter

They were not as complex as the structures that would soon follow, but they influenced the Egyptian way of life.

That’s why many other temples appeared not long after, and their design changed from simple shrines to massive structures that were truly home of the gods.

Temples were built in Egyptian controlled oases as far as the Libyan desert, as far as Siwa, and in numerous outposts located throughout the Sinai Peninsula.

When ancient Egypt controlled Nubia, temples were also built there.

It was a temple mania that was embedded into the very foundations of the ancient Egyptian Culture. That’s why in this article, we’ve decided to dig and search for the rarest vintage images of Ancient Egyptian Temples that we could find.

It can officially be said that the expansion of funerary monuments began with the reign of Djoser, who commissioned a massive complex built entirely out of stone and placed in the enclosure of a step pyramid (The Pyramid of Djoser) under which he was buried.

This led to a revolution in the way temples and complexes were built.advertisement

Djoser had started a building revolution, and for the rest of the Old Kingdom, tombs and temples were built inside intricate and elaborate stone pyramid complexes.

During the New Kingdom, the temples grew in importance, and the Pharaohs devoted more and more resources towards temples, which grew larger and more elaborate.

Now, join us as we travel in time, looking through some of the most amazing vintage images of Ancient Egyptian Temples.

Vintage Images of Ancient Egyptian Temples: The Temple of Edfu

Dedicated to the ancient Egyptian god Horus, the Temple of Edfu is Egypt’s second-largest temple after the Temple complex of Karnak.

The temple at Edfu is one of the best-preserved ancient Egyptian temples.

Its construction started in the year 237 BC when Pharaoh Ptolemy III ruled over Egypt.

It was completed two centuries later, around 57 BC, by Pharaoh Ptolemy XII, the man who fathered Cleopatra.

The temple was one of the many temples erected during the Ptolemaic Dynasty, including the Dendera Temple complex, Esna, the Temple of Kom Ombo, and Philae.

The temple was one of the most important worship centers of ancient Egypt. IT was the center of several religious festivals sacred to Horus.

Each year, “Hathor traveled south from her temple at Denderah to visit Horus at Edfu, and this event marking their sacred marriage was the occasion of a great festival and pilgrimage.”

Like many other structures of ancient Egypt, the temple at Edfu also became buried over the centuries by drifting desert sand and layers of river silt deposited by the River Nile.advertisement

By 1798, only the temple pylons’ upper reaches remained visible when the temple was re-discovered by a French archaeological expedition.

Located on the east bank of Egypt’s famous Nile river, in the city of Luxor (ancient Thebes) are the remains of a temple that was constructed around 1400 B.C.

Known in Egyptian as ipet resyt, “the southern sanctuary,” this ancient temple is one of many other sanctuaries built on the river’s east and west banks.

Unlike all other temples built in ancient times in Thebes, the Luxor Temple was not dedicated to the veneration of a God, nor did it deify the king in the afterlife.

Instead, this ancient temple was the place where many rulers of Egypt were crowned as kings.

During the New Kingdom of ancient Egypt, the Mortuary Temple of Ramesses III at Medinet Habu was of great importance.

In addition to its size and intricate architectural and artistic styles, this ancient temple is famous for the inscribed reliefs depicting the advent and defeat of the mysterious Sea Peoples during Ramesses III’s kingship.

The temple spreads 150 meters in length and closely resembles the nearby temple of Ramesses II, aka the Ramesseum.

The Karnak open-air museum is considered the second most visited historical site in Egypt; only the Giza Pyramids near Cairo receive more visits.

And what’s a list of incredible vintage images of ancient Egyptian temples if you don’t include images of the Abu Simbel rock temples.

Located near the border with Sudan, the Abu simple temples are located on the western bank of Lake Nasser.

The twin temples were carved out of the mountainside in the 13th century BC, during Pharaoh Ramesses II.

The twin temples were carved and built as a lasting monument to the king and his queen Nefertari and commemorate the Pharaoh’s victory at the Battle of Kadesh.

Join the discussion and participate in awesome giveaways in our mobile Telegram group. Join Curiosmos on Telegram Today. t.me/Curiosmos