I guess there are a handful of D.A.’s who actually do their job(only after public outcry of course). Though I’m sure the sentencing hearing will make me want to throw up when they end up getting no jail time. But it’s something. That was a nifty list of felony charges. Nice… Fucking pigs man. Of course the Department only decided to do the right thing once they had been caught red handed via the civilian footage of the incident. Hence why these losers hate cameras SOOOOO SO damn much.

LOW QUALITY HUMAN BEINGS. That’s what just about all cops are. Unintelligent, bland, douchey, power-tripping wife beaters who couldn’t beat a 4th grader in a spelling bee and only graduated from the Academy because they scored low enough on their exams. These guys seem to hate being on camera almost as much as they hate it when they finish their shift for the night without having had the chance to blast a hot piece of metal into another living creature.

If a cop isn’t taking a life, they are at the least ruining one.

For my own psychological well being I’m going to try to limit re-publishing these pig misconduct stories to only a few a month, so if you want to follow these stories more regularly I would suggest the following channels: 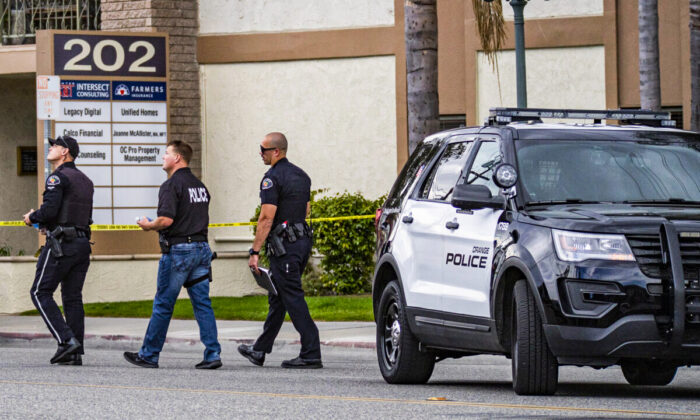 Rodger Jeffrey Corbett, 49, of Corona, and Kevin Andrew Pedersen, 34, of Fullerton, are facing criminal charges of kidnapping, false imprisonment by violence, menace, fraud or deceit, and enhancement with firearm, according to a June 20 statement by the California Department of Insurance.

The state agency and the Orange County District Attorney’s Office Special Prosecutions Unit launched an investigation after a video was posted on social media showing Corbett and Pedersen attempting to locate a subject who had missed court appearances.

The person who posted the video misidentified the two men as undercover police officers.

Investigators later found out Corbett and Pedersen had not completed the requirements to be “bail fugitive recovery persons”—commonly known as bounty hunters. They allegedly kidnapped and handcuffed the girlfriend of the subject whom they were seeking and drove her around for several hours while being visibly armed, the state agency stated.

The authorities are still investigating the incident, where the “unpermitted” bail fugitive recovery persons were hired by a licensed bail agent, according to the statement.

The alleged kidnapping dates back to October 2020, according to various media reports.

Though bounty hunters in California do not need to be licensed by the state insurance department, they need to complete training courses, have no criminal records, and be hired by licensed bail agents in order to arrest bail fugitives legally. The state is now considering Assembly Bill 2043, which was introduced in February, to require bounty hunters to be licensed.

Marlin Stapleton, the attorney representing Corbett, said the girlfriend was trying to help the fugitive to evade capture after he was being accused of assault with a deadly weapon and domestic violence.

Stapleton said she is confident that Corbett will be exonerated because they are “good guys.”

Both Corbett and Pedersen had previously served as police officers in Orange County.

Corbett was given a pre-trial diversion sentence in February 2021 after being charged for filing a false police record to cover up the then-Fullerton city manager’s DUI crash in 2016. The diversion program requires Corbett to complete 80 hours of community service, pay $500 in restitution, and agree to no longer work in law enforcement—in exchange for eliminating not only prison time but also the case from his record.

His employment with the Fullerton Police Department already ended in March 2018, according to Orange County Register.

Pedersen was fired in 2018 by the Anaheim Police Department after he and another officer fired more than 76 gunshots and killed a man in a car chase in Anaheim.

Their arraignment is scheduled for June 29.

Rodger Jeffrey Corbett, 49, of Corona, and Kevin Andrew Pedersen, 34, of Fullerton, are scheduled to be arraigned June 29 on three felony counts each of kidnapping, false imprisonment by violence, menace, fraud or deceit and enhancement with firearm in the commission of a felony, a news release from the California Department of Insurance states.

Corbett and Pedersen allegedly forcibly kidnapped and handcuffed the girlfriend of the man they were seeking and drove her around for several hours, the news release states. They were both “visibly armed” at the time of the alleged kidnapping, the department said.

The defense attorney representing Corbett, Marlin Stapleton Jr., denounced the allegations, saying the men are “completely innocent,” according to the Los Angeles Times.

“Our clients were trying to capture a violent fugitive and now they’re being charged with a kidnapping. It’s almost incomprehensible,” Stapleton told the Times.

Both Corbett and Pedersen left their police department jobs under controversial circumstances.

Corbett was accused of filing a false police report in 2016 while investigating a crash involving the then-city manager of Fullerton, who had been drinking.

Pedersen was fired from the Anaheim Police Department after a 2018 incident in which he and another officer fired their weapons 76 times at a suspect during a pursuit. The man, who was armed with an airsoft gun and under the influence of drugs, was killed after being struck by at least nine police bullets.

California law allows people to work as bounty hunters on behalf of licensed bail companies, only if they complete required trainings.

The Department of Insurance is currently sponsoring a bill to require bounty hunters be licensed and to require better oversight.